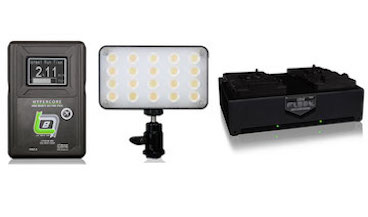 “These three new models represent the company’s diverse product range and commitment to our customers to offer a variety of technology solutions,” says Jose Flores, Sales Manager, Core SWX. “ Here, at one show, we will be able to display an innovative power supply, versatile lighting option and robust charging solution — something that not every company can provide. We encourage all conference goers to visit our booth and take a look at each individual product for themselves.”

The HC8 is the latest addition to the Hypercore SLIM series and the first line of slim battery packs capable of handling high-draw loads, making them ideal for UAV, handheld gimbal and all other applications demanding a low-profile battery pack. They are capable of powering RED®, ARRI ALEXA Mini® and similar digital cameras, handling draws of up to 148Wh (10A) without deterioration in service life or operability. An LED backlit runtime LCD on the front of the HC8 battery pack lets users know how much battery time is left when in use and will also show remaining charge time while connected to a charger, allowing users the opportunity to plan out their shoots down to the minute. The battery’s cells are incased in an over-molded, rubberized housing, providing additional protection against accidental impacts that may occur when operating alongside UAVs. Like the Hypercore Prime, this 85Wh battery pack is safe and legal for air travel. The HC8 is available in V-mount, 3-Stud mount and V-mount RED to communicate exact remaining battery capacity to the RED camera’s LCD/VF.

As with all products within the Hypercore series, the HC8 is outfitted with an accelerometer to detect motion. This causes the battery packs to hibernate when there is no usage or movement after a 48-hour period. Once the battery is back in use or detects the slightest movement, it awakens at its maximum capacity. Like all Core SWX battery offerings, each battery in the Hypercore series has an integrated P-tap connection on its side that lets users power any 12-volt DC device. Hypercore battery packs are also the most charger-compatible in the industry today. Not only do the batteries charge on any charger within the Core SWX line-up, but the V-mount offerings will charge seamlessly on RED, IDX™ and Sony chargers. The 3-Stud products will charge on Anton/Bauer™ chargers firmware V3.6 and up.

Leveraging a newly patented Refractory Lens Technology providing a 250W equivalent light output while 40 percent thinner than its predecessor (the Bolt 220R), the new TL-BT250 draws 13W of power and includes a separate on/off switch. Featuring a wireless remote, the TL-BT250 can control the light from up to 250 feet away (non LOS). The nine channel remote control and magnetic diffusion filter allows users to control on/off, select color temperature and adjust light intensity. With the remote capability, users can easily adjust light settings at the tip of their fingers. Additionally, the TL-BT250 allows users to bank up to 10 lights per channel, allowing for control of the lights in unison.

The TL-BT250 has an independent knob for color temperature between tungsten (3200K) and daylight (5600K), eliminating the need to mix and match between two dials for the most accurate ambient light. The full 0-100 percent dimming control allows users to change the brightness with no noticeable color shift. The TL-BT250 also comes with an accessory package that includes a 1/4-20 Swivel Shoe mount, PowerTap cable for DC powering off of a standard 14.4V brick battery and magnetic diffusion filter. It also includes a battery and charger kit and accepts Sony L-Series batteries.

With two independent charge bays, the Fleet D charger is ideal for ENG and mobile production. Featuring a compact design that allows the charger to fit in almost any travel bag, the Fleet D also features a recessed carry handle. Its all-aluminum body will hold up to any rugged traveling conditions and allows for stacking of multiple units further demonstrates a nod towards mobility.

The Fleet D offers the fastest charge times in the industry with a quick charge current of 3A and input voltage of 90-240VAC 50/60Hz, completing a recharge on two 98wh battery packs in 2.5 hours. It measures in at 8.86in x 3in x 6.19in and weighs 1.6lbs. The Fleet D is available in 3-Stud Mount and V-Mount options.